We all like to learn from the best. So when it comes to growth it’s tempting to take global high-performers like GE, IBM, Shell, or BMW as role models and look for opportunities outside the home markets.

The trouble is that these global role models are much easier to admire than to imitate. In an analysis of 20,000 companies in 30 countries, we found that companies selling abroad had an average Return on Assets (ROA) of minus 1% as long as five years after their move. It takes 10 years to reach a modest +1% and only 40% of companies turn in more than 3%. 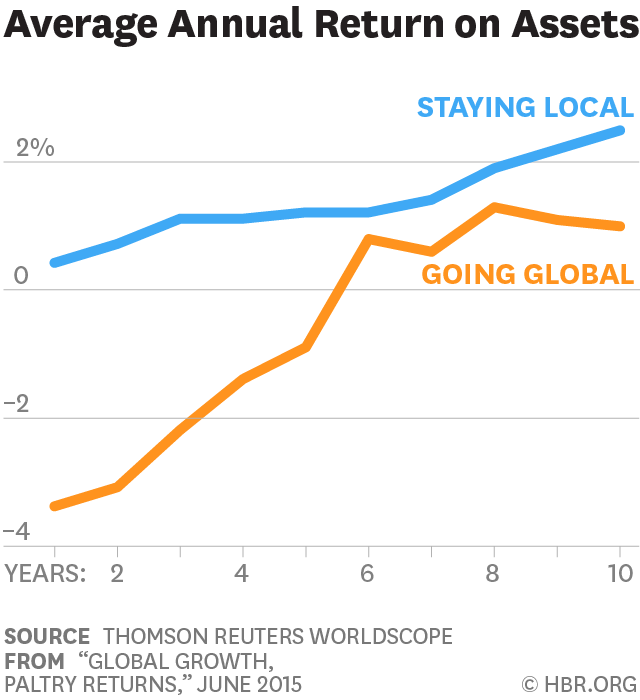 Find this and other HBR graphics in our Visual Library

A look at Devon, a mid-size U.S. oil and gas producer, illustrates why international expansion produces such low numbers for so many companies. In 1999 Devon acquired PenzEnergy and in 2000 Santa Fe Snyder. The two deals gave it access to operations in Azerbaijan, West Africa, and Brazil.

After making some initial investments in these oil fields Devon eventually realized that it lacked the scale to absorb the risks that came with them. When approvals for environmental permits were delayed in Brazil, for example, the company was forced to incur rental costs on drilling equipment that it could not deploy to alternative fields and was forced to take a capital hit that a firm its size could ill afford. In 2009, Devon therefore sold off all of its foreign assets and used the proceeds to invest heavily in booming shale development in the U.S.

Global expansion is also more complicated to manage. In the 1990s Boise Cascade, a large, vertically integrated wood-products manufacturer in the U.S., decided to expand to Brazil, where it acquired timberlands and built a new mill.

Operating in Brazil, however, turned out to be much more difficult than expected because of regulatory, political, and cultural differences. Management attention, including frequent trips to Brazil, took far more time than for similar plants at home. While Boise was able to make the business profitable after a few years, the profits were not high enough to justify the added investment needed and the disproportionate drain on top management time. In 2008 Boise threw in the towel and sold the Brazilian operation to a local paper company for $47 million.

The lesson to be drawn from these experiences is that most companies should not treat international expansion as a default growth option. Like diversification it comes with many challenges. Few companies have the size or management capabilities to make a success of going overseas and for most it may well be more profitable to look closer to home.

Look at the data. We found that companies in our database that expanded domestically typically had an average ROA of +1% after five years, rising to +2.4% after 10 years, with 53% exceeding 3%.

And companies can excel without going abroad: although the global giants like GE, IBM, Shell, and BMW are undeniably high-performers, a full third of the top 10% ROA performers in our database conduct almost no international business.

A version of this article appeared in the June 2015 issue of Harvard Business Review.

Christian Stadler is an associate professor of strategic management at Warwick Business School in the UK and the author of Enduring Success: What We Can Learn from the History of Outstanding Corporations. Twitter @EnduringSuccess.

Michael Mayer is professor of strategic management at the University of Bath, School of Management, in the UK where he is Research Director of the Centre for International Business and Management (CIBAM).

Julia Hautz is an assistant professor of strategic management at Innsbruck University School of Management in Austria.

This article is about INTERNATIONAL BUSINESS